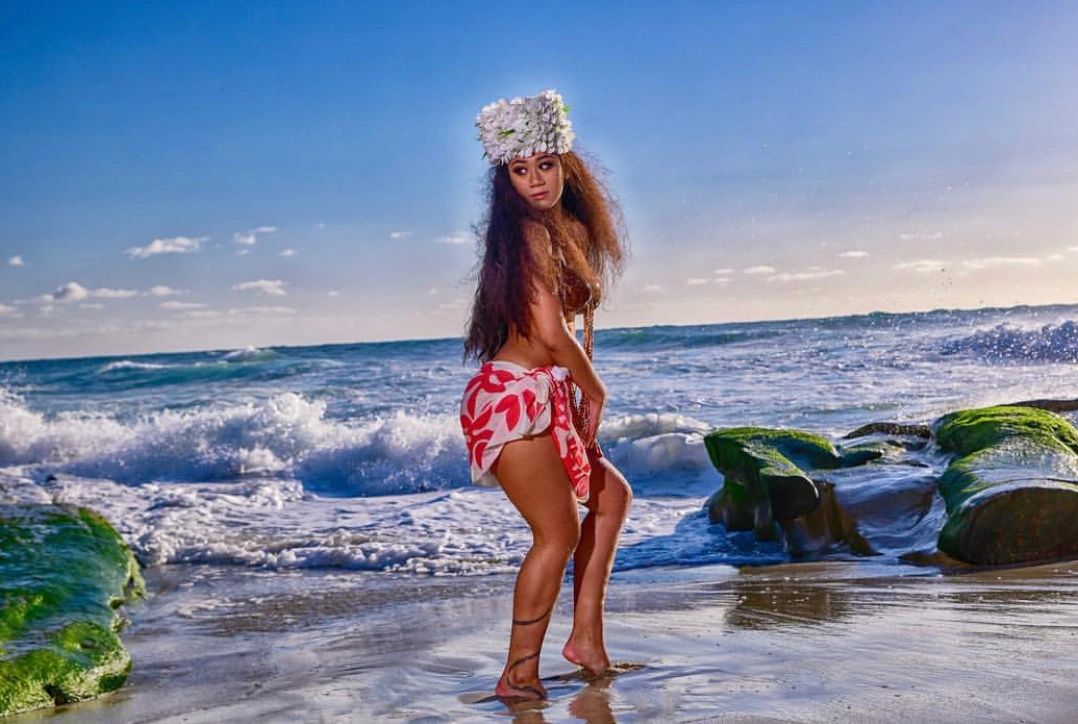 Kanani Lokelani Asuega is of Hawaiian and Samoan descent, and was born into a family of world-renowned Polynesian entertainers. She grew up dancing in her family’s group, Lokelanis Rhythm of the Islands, and is now the Lead Instructor & Co-Creative Director for Lokelani’s under which she has helped lead the group to create numerous award-winning dancers & performances. Throughout the last 17 years, Kanani has performed all over the world including the sacred stage of To’ata in Tahiti, Bora Bora, Mexico, Europe, and Japan. In 2017, Kanani was hired as a Polynesian Entertainer in Okinawa under Rose Perreira and Tiare Toa where she served a 6 month contract dancing at a hotel Luau show. Aside from performing, Kanani is a 12-time Overall winning tahitian soloist at various competitions around the world, including titles Heiva I Paris Top Vahine 2018 and ‘Ori Tahiti Nui World Championship 2019 Vahine Champion. In 2018, Kanani also performed with Nonahere of Mahina, Tahiti under the direction of Matani Kainuku in their 2018 Heiva I Tahiti performance. Her goal as a young Polynesian Woman is to lead by example. Kanani strongly believes in “Reaching for the stars..” and working everyday to achieve your best life. She has always been inspired by her parents, Kathy & Roy Asuega, and how they opened a dance studio, to not only continue teaching dance, but to also provide a home for others. Growing up in a studio, watching her parents take care and motivate so many people gave Kanani the desire to do the same for following generations. In her workshops, Kanani wants you to feel loved and pushed to be your greatest self. She hopes to guide you to connect with your own heart and soul, to challenge yourself, and to build the confidence to tackle anything in life. Meet Kanani Lokelani Asuega.

-Basics and Conditioning: You will learn Kanani’s style of ‘Ori Tahiti with drills and tips to advance your skills. In this workshop, you will tackle both 'Aparima & 'Ote'a techniques, focusing on the grace and power of 'Ori Tahiti.

- Solo Intensive Training:  You will receive valuable tips and tricks to improve your performance. Kanani will help structure and define your solo, share her do's and don't's when doing freestyle dance, and provide creative choreography.

'Ote'a & 'Aparima: This workshop will include language & dance to further deepen your connection to 'Ori Tahiti. You will receive both the 'Aparima lyrics with translations & the 'Ote'a pehe to take home.

PRIVATE LESSONS AVAILABLE TO REGISTRANTS OF THE WORKSHOP ONLY

Join us for our open house and first day of class for the 2020 season! All ages and levels welcome!

HOTM instructors will be traveling to Orlando, FL to learn from Tahiti's most notable dancer, Moena Maotui of Tahiti Ora.

Calling all 'Ori Tahiti dancers in Texas and surrounding states! HOTM will be hosting a workshop with Multi-Overall Winning Tahitian soloist...